Through the following courses, similar to independent research courses at other Canadian institutions, senior undergraduate students are free to pursue a topic of research with guidance from the course professor and an assigned tutor with particular expertise in the given area of study. Alternatively, faculty members may seek out interested undergraduate students to assist with in-laboratory or in-field research programs, within which the student can pursue an independent project.

Before registering in any of the above listed courses, students must satisfy the stated prerequisites and discuss the topic they wish to explore with the course professor. 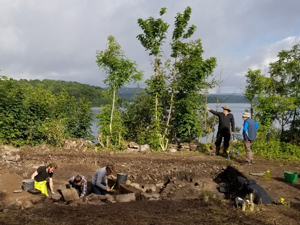 My name is Jill Armstrong. In 2019 archaeologists excavating a crannog in Lough Cé, Ireland found evidence of habitation by a high-status Gaelic lordship and I was there. As a participant in the archaeological field school, operated jointly by St. Louis University and Galway University, Ireland, I was fortunate to be able to experience the elation that accompanies the discovery of items long buried. I was also fortunate enough to find a gaming piece made of antler while on sieving duty. It has been dated to about the 10th century. My research paper/Thesis for AU’s ANTH 405: Special Topics in Archaeology focused on McDermott Castle in County Roscommon, Ireland; however, the paper also briefly explored multi-purpose uses for Irish crannogs—man-made islands—found throughout the country and specific to Ireland and Scotland. Excavations are slated to continue in 2020.

The Role of Artifact Catalogues in Archaeology 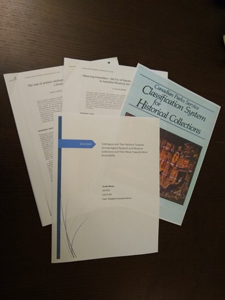 My name is Aysha Braun and I completed ANTH 405: Special Topics in Archaeology where I investigated the history of the development of artifact catalogues in archaeology and the role they play in our discipline. I focused my research on how catalogue accessibility has changed and how they are and should be used to assist in understanding people of the past. While the creation of artifact catalogues is time consuming and tedious it is important that they are created, both for recording the archaeological record, comparative studies, and for various institutions to ethically keep track of these ‘belongings’ and making them available for public viewing (while considering particular ethical and cultural issues). My thesis concluded with the creation of a catalogue template for AU’s Stann Creek Regional Archaeology Project (SCRAP), directed by Dr. Peuramaki-Brown. This research made me realize how much work goes into the creation of catalog, as well as the biases inherent to such creation. Such catalogues should have accompanying guidelines and training to better the consistency in their use across a project and beyond, and when possible, should be made available for use by others through an online, open platform.

Photo caption: Examples of some of the literature and catalogues I considered in my research. A. Braun, 2019.

Historical Archaeology: Reading Between the Lines of the Documented Past 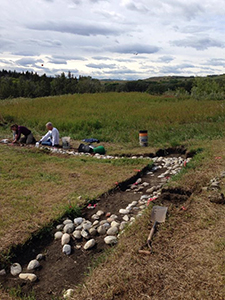 My name is Dawn Wambold and I recently completed ANTH 405: Special Topics in Archaeology. My research for this course focused on historical archaeology: a sub-field of archaeology that seeks to bolster our understanding of documented history through the analysis of material culture—adding to the known history of a site and helping to document unrecorded aspects of the past. For example, many historic documents tell us about the literate elite of a society but do not always tell the story of the average person. My research investigated the usefulness of historical archaeology and demonstrated its application through the presentation of a case study focused on the analysis of excavations being conducted at the Glenbow Town and Quarry Site in Southern Alberta. These excavations resulted in the discovery of the foundations of the quarry manager’s house (see photo).

Results of this case study helped demonstrate that historical archaeology can provide a valuable contribution to the understanding of this site. For example, a tool with “J. Oger” stamped on it was positively associated with its owner through the 1911 census. This tool was used for finishing work on the quarried limestone and therefore gave us more insight into the type of work in which Mr. Oger would have engaged. Other artifacts confirmed the presence of women and children at the site; remarkable finds given the excavations were taking place at the workers’ quarters at the quarry and not the town itself. Future research at the Glenbow site is expected to focus on the workers’ bunkhouse and provide further insights, including the identification of class differences between quarry managers and labourers.

Photo caption: Site EgPo-22 showing the building foundation as exposed in 2015. Future excavations will focus on the grassy area in the background as the probable location of the bunkhouse. (Copyright: Dawn Wambold, 2016).

Preliminary Obsidian Source Analysis for the Site of Alabama, Belize 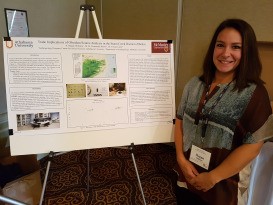 My name is A. Megan Williams and I took part in a study focusing on sourcing analysis of obsidian (volcanic glass) from an ancient Maya archaeological site. This was the focus of my independent research project for ANTH 405: Special Topics in Archaeology, and I went on to present my results at a conference in Edmonton, Alberta.

As part of the Stann Creek Regional Archaeology Project (SCRAP), worked obsidian pieces were systematically collected from the surface of settlement zones at the Maya archaeological site of Alabama in the east-central region of Belize. In collaboration with my course professor and her colleague, I subjected these artifacts to Energy Dispersive X-Ray Fluorescence spectrometry (EDXRF) at the McMaster Archaeological XRF Lab (MAXLab), in an effort to determine their source location. The primary goals this this research project were to effectively determine the geographic origin of the obsidian found at Alabama, to then evaluate the results of the EDXRF analysis and integrate them into what is already known about Late/Terminal Classic (ca. 600-900 C.E.) trade in the Maya world, and to develop further working hypotheses regarding Alabama obsidian and trade route access over time, which can be tested in upcoming excavations.

The EDXRF analysis of the Alabama obsidian revealed that all but one artifact originated from three major outcrops in the highlands of Guatemala. This data correlates with what we know of other sites located in east-central and southern Belize, most obtaining obsidian from Guatemalan sources as opposed to Mexican outcrops. However, the quantities in which each source is represented is intriguing; it had previously been proposed that Ixtepeque obsidian was traded predominantly via coastal routes and El Chayal obsidian via an inland route. The fact that both sources are represented here in relatively high quantities may suggest that Alabama was receiving obsidian, and perhaps other commodities, from inland as well as coastal trade paths. Its proximity to the coast of Belize (20km) and the fact that it lies on a riverine path inland, the Waha Leaf Creek, could have facilitated the movement of goods from the coast and its closeness to the Hummingbird Gap, a path through the Maya Mountains of Belize, could have easily brought goods to Alabama via an inland route. The access to multiple trade routes could present the possibility that Alabama functioned as a way station for the movement of goods through this area of the Maya world.

Soviet Bodies in Canadian DanceSport: A Case Study of a Diasporic Dancers in an Ottawa based Dance Studio.

David Outevski enrolled in ANTH 406: Special Topics in Anthropology to examine the effect of Soviet Union era indoctrination on dance pedagogy and performance at a DanceSport studio run by Soviet migrants in Ottawa. He investigates the processes of cultural cross-pollination within this population through an analysis of first and second generation Soviet-Canadian ballroom dancers’ experiences with cultural identity within the dance milieu.

David started to dance Ballroom and Latin in his early teens. He has trained and performed as an amateur for 8 years in Montreal, Canada, where he has completed a college degree in liberal arts from Dawson College and has begun his studies in anthropology as an undergraduate at Concordia University. Moving to England in 2005 as an exchange student, he continued his academic career at Keele University, Staffordshire. Having been offered a job as a dance teacher in London, David decided to continue his career there, teaching at various studios and performing around Europe. In order to complete his undergraduate degree, David moved to Athabasca University as a distance student and has been pursuing his degree online ever since while working as a dancer and dance educator.

David’s study is guided by questions such as: What are the differences in the relationship between national politics and dance in Soviet Union and Canada? How have Soviet migrant dancers adapted to the Canadian socio-economic context? And, how did these cultural shifts affect the teaching and performances of these dancers? His positionality as a former Soviet citizen and a ballroom dancer facilitates his understanding of the intricacies of this community and affords me unique entry into their world. To contextualize this study, David conducts an extensive literature review dealing with Soviet physical education, diasporic identities, and embodied politics. He then carries out qualitative interviews and class observation of these Soviet-Canadian competitive ballroom dancers at their studio in Ottawa.

David’s analysis will contribute original information to the fields of dance anthropology and pedagogy, migration studies, and cultural studies. The results of this study could act as a guide in the development of arts management, education, and cultural integration policies in Canada, fostering a creative dialogue between dancers, academics, and policy makers.

Neolithic sites of the Orkney Islands 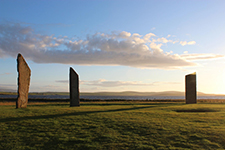 My name is Lorri Lyster, from Halkirk, Alberta. For ANTH 405: Special Topics in Archaeology, I chose to examine how the Neolithic sites of the Orkney Islands in the north of Scotland provides evidence for Orkney’s role as a very important pilgrimage site used by people from the whole of Britain and Ireland, and probably France as well. I visited Orkney in 2014, as a direct result of having read about these sites in an AU Anthropology course—I wanted to see them for myself. I fell in love with the place and returned for a longer visit in 2017, and this time we visited in July while the Ness of Brodgar excavation was open to the public. 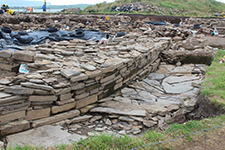 Orkney is a place everyone should see. The massive stone circle known as the Ring of Brodgar, the Standing Stones of Stenness, the incomparable village of Skara Brae, Maeshowe Tomb, Midhowe stalled cairn and the bi-level Taversoe Tuick Tomb on the island of Rousay, Isbister Tomb on South Ronaldsay, and tombs you have to really work to see, at the top of the huge hills—Wideford Hill and Cuween Hill—these are just a small sample. 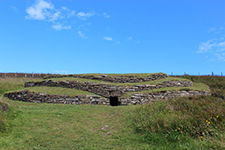 The Ness of Brodgar site, on the isthmus between Loch Harray and Stenness Loch, lies directly between the Standing Stones of Stenness and the Ring of Brodgar, and is turning British archaeology on its ear. It is such a spectacular place that it is making everyone realize that Orkney’s image as isolated and remote is a modern-day construct, but it certainly would have been a very important place during Neolithic times, a meeting place and oftentimes a place of conspicuous consumption. Orkney is rivalling places like Newgrange, Avebury, and Stonehenge, and every year it gives up more of its secrets.